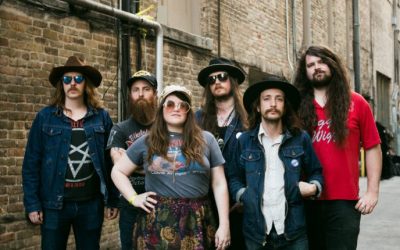 After spending much of the last two years on the road, relentlessly showcasing their critically acclaimed 2015 self-titled debut album, the six bandmates of Banditos regrouped in late 2016 at Plum Creek Sound Studios in Dripping Springs, TX, and democratically poured out sonic influences and emotionally charged personal experiences for their new album Visionland.

Produced by Israel Nash and Ted Young, the Birmingham/Nashville-based group’s second full-length has one foot firmly planted in

After spending much of the last two years on the road, relentlessly showcasing their critically acclaimed 2015 self-titled debut album, the six bandmates of Banditos regrouped in late 2016 at Plum Creek Sound Studios in Dripping Springs, TX, and democratically poured out sonic influences and emotionally charged personal experiences for their new album Visionland.

Produced by Israel Nash and Ted Young, the Birmingham/Nashville-based group’s second full-length has one foot firmly planted in reality as the other tip-toes in and out of mental complexities, self-perception, and altered-state illusions. The results are revealing, exhilarating and profound.

The album-titled track reveals these defining, cohesive thematic intricacies. Visionland is named after the defunct $60 million theme park that was built in the late ’90s near some of the band members’ childhood homes in Bessemer, Alabama. The park was shut down after only five years and the schizophrenic glimmer of hope it offered local residents connects to a greater overlying optimism for life present at the album’s core, an eerily relevant theme in contemporary complex times. Jeff Salter’s sweeping guitar strums swell at the song’s intro, lifting through the murky haze into the warm and sunny clarity of a duet between singer Mary Beth Richardson and singer/guitarist Corey Parsons.

“Strange Heart” rides to new 13th Floor Elevators psychedelic heights, with Richardson’s scorching, raw, show-stopping voice echoing Merry Clayton’s chilling performance on The Stones’ “Gimme Shelter.” Later in the album, singer/banjo player Steve Pierce channels the ebullient folk of electric Dylan with his free & easy flow on “Fun All Night.” The band also brought in the outside artistic talents of storied keys player Earl Poole Ball, upon a chance interaction they had after seeing him play with Ramsay Midwood at Sam’s Town Point in Austin, TX. Ball has performed and collaborated with The Byrds, Johnny Cash, Buck Owens, Gram Parsons, Merle Haggard, and many other greats.

There is a shared mindset throughout; a persevering glint of what could be, a distorted possibility, struck by a frigid gust of reality. Like some sort of modern-day, Southern-born The Band, some songs were written over years by a single member (the surfy jam “Lonely Boy”, which was written by singer/guitarist Parsons in response to being tour weary), others by a combination of the players (the punk-garage soul Stooges-meets-Velvet Underground churner “Fine Fine Day” was penned when Parsons and Pierce drank massive amounts of vodka one day in Opelika, Alabama) and the dynamics show for it. There’s a phantasm of vintage ’60s Etta James soul (plus burning-hot background singers) on “Healin’ Slow” and, later, the hopping country blues of “DDT.” Topics and styles range this way on Visionland- the heavy and emotional to the light and simplistic – but the Banditos always sound like themselves and always drive the nail deep into the groove.

The members of Banditos first met playing in various punk and rock ‘n’ roll projects around Birmingham at D.I.Y., all-ages venues. In 2010, Parsons and Pierce began busking around town and were soon asked to perform at their favorite local bar. Without a full band, they invited friends Randy Wade (drums), Salter (guitar), and Richardson to join them. Danny Vines (bass) joined the band later.

The group has been praised by NPR (“Three vocalists, a wicked guitarist…a banjo, an upright bass, and a hot-footed drummer guarantee that every song they play is stuffed with crazy rhythms and melodic energy.”), Rolling Stone (“Equal parts alt-country twang and garage rock bang…recalling everything from ZZ Top’s greasy boogie to the Alabama Shakes’ coed soul”), and Garden & Gun (“These six keyed-up twentysomethings mix a hodgepodge of sounds. Sometimes it’s barroom country backed by a rogue kazoo, and other times it’s a chicken-picking version of slow-burning soul behind the Janis Joplin-esque wail of Mary Beth Richardson”). They have performed across the world supporting acts like St. Paul and the Broken Bones, Blackberry Smoke, and Old 97’s, and notably at prominent events like Newport Folk Festival, Hangout Fest, and Rachael Ray’s Feedback.