Please note, this event has expired.

Presented by MAD? Make a Difference in Alabama at Virtual via Zoom, Birmingham AL 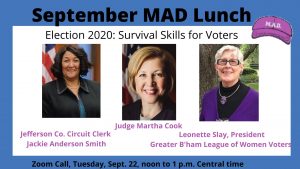 Democracy hangs in the balance & voting couldn’t be more important. Join us on Zoom to hear from Jackie A. Smith, Martha R. Cook, & Leonett at the heart of ensuring our right to vote in Jefferson Co.

With many saying our democracy hangs in the balance, voting – and getting out the vote – on Nov. 3 couldn’t be more important. Join us Sept. 22 for a Virtual MAD lunch to hear from three women at the heart of ensuring our right to vote in Jefferson County: Jefferson County Circuit Clerk Jackie Anderson Smith, Judge Martha Reeves Cook, and Leonette Slay, President, League of Women Voters of Greater Birmingham.

Registration is required. To register in advance for this meeting, click on:

With many saying our democracy hangs in the balance, voting – and getting out the vote – on Nov. 3 couldn’t be more important. Join us Sept. 22 for a Virtual MAD lunch to hear from three women at the heart of ensuring our right to vote in Jefferson County: Jefferson County Circuit Clerk Jackie Anderson Smith, Judge Martha Reeves Cook, and Leonette Slay, President, League of Women Voters of Greater Birmingham.

Registration is required. To register in advance for this meeting, click on:
https://us02web.zoom.us/meeting/register/tZwrdeCpqDgpGtD93zbQa55k8-pF-JgsBR-s
After registering, you will receive a confirmation email containing information about joining the meeting.

Here are details about our speakers:
About Jacqueline “Jackie” Anderson Smith … Ms. Smith is the Jefferson County Circuit Clerk in Alabama’s 10th Judicial Circuit. A six-term elected member of the Jefferson County Board of Education, Ms. Smith ran for and won the Circuit Clerk post in November, 2018. She now manages a budget of around $45 million, oversees 40 employees, and is primarily charged with the administration and processing of financial fees associated with the Circuit Civil, District Civil, Small Claims, Domestic Relations, and Criminal Courts in Jefferson County. Her work includes serving on the Elections Commission; service as Chief Magistrate of a staff of six magistrates; administrative support of Constables, Bail Bonding company compliance; and Accepting Applications for Passports. Ms. Anderson Smith is a sixth-generation educator and a proud descendent of slaves who taught other slaves and freed men to read more than a century ago. She taught in the Birmingham school system and worked in Birmingham City government and Jefferson County government from which she retired in 2015. She attended Miles College School of Law and has completed professional development coursework in education and banking. Additionally, she has worked as a proposal researcher-writer, manager of AmeriCorps Health Access, and director of Jefferson County’s Workforce Development office, and free-lance business entrepreneur, among other activities. She is a member of St. Marks C.M.E. church and has two children and three grandchildren.

About Judge Martha Reeves Cook… Judge Cook has been serving the people of Jefferson County on the District Court Bench since March of 2019. Judge Cook was selected from a pool of more than 25 applicants by the Jefferson County Judicial Commission and was ultimately appointed to fill a vacancy by the Governor. Judge Cook brings to the bench 23 years of experience as a trial attorney and mediator. Before becoming a Judge, she ran her own law practice where she litigated and mediated civil matters including consumer rights actions, real estate disputes, and personal injury cases. She has also served as guardian ad litem for minor children needing legal representation. Her clients have included individuals, local restaurants and retailers, non-profit organizations, and the YWCA of Central Alabama. She is also a past partner at the law firm of McCallum Hoaglund Cook & Irby, LLP. A proven leader in the legal profession, Judge Cook has chaired the Birmingham Bar Association’s Diversity and Inclusivity Committee and the Alabama State Bar’s Dispute Resolution Section. She has also served on executive boards for both the state and Birmingham Bar Association’s Women’s Sections. Judge Cook was born and raised in Selma, Ala., and moved to Birmingham to attend Samford University’s Cumberland School of Law. She is a proud mother of two teenage sons. Judge Cook won the March 2020 Democratic Primary Election with 69% of the vote and will run unopposed in November.

About Leonette Slay… Ms. Slay, president of the League of Women Voters (LWV) of Greater Birmingham, first joined the League in Austin, TX, and has been a member in Kentucky, South Carolina, and Alabama. She has served as co-president of the LWV of Alabama and president of both Tuscaloosa and Birmingham Leagues. Leonette is a retired Army officer and Department of Defense civil servant. She has lived in the Bluff Park neighborhood of Hoover, AL, since 2003. Sept. 22 is actually National Voter Registration Day, and Leonette says Leagues throughout the nation will be emphasizing the importance of registering to vote in the November 3 election. To access the League’s absentee voting tips flyer, go to lwval.org/learn-vote/absentee-tips.pdf . The LWV has other helpful information on its lwvgb.org home page.

New to MAD Lunches? MAD?Make A Difference is a progressive women’s lunch forum that has been meeting every 4th Tuesday in Birmingham, AL., since January 2017 to advance 1) education and 2) networking for political change in Alabama. During the 2020 pandemic, we host Zoom lunch-time conversations with Alabama political leaders, advocacy professionals, and local activists to help you stay engaged and get involved in the change process. Zoom events are easy to access, but we do ask you to register in advance.
If you want to follow our events and newsfeed on women who are leading change, mark every 4th Tuesday on your calendar (3rd Tuesday in November, and no MAD lunch in December), “like” our Facebook page. Questions or suggestions for MAD? Email Jennifer L. Greer at jenniferlougreer@gmail.com, or Shannon Haddock at shannonehaddock@gmail.com.

Free Admission.  Register with the link to get information for linking with MAD? Make A Difference via Zoom.