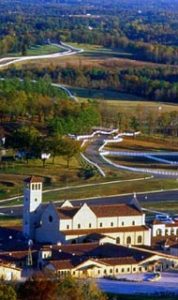 The traditional artwork throughout the Shrine of the Most Blessed Sacrament is intended to inspire devotion in the hearts of all who come here to pray. The Romanesque-Gothic architecture of the Shrine and Monastery was inspired by the great Franciscan churches and monasteries of the 13th century.

Construction was done by Brice Building Company, using modern techniques and materials to reproduce the distinctive architectural features of the famous Franciscan edifices.

The traditional artwork throughout the Shrine of the Most Blessed Sacrament is intended to inspire devotion in the hearts of all who come here to pray. The Romanesque-Gothic architecture of the Shrine and Monastery was inspired by the great Franciscan churches and monasteries of the 13th century.

Construction was done by Brice Building Company, using modern techniques and materials to reproduce the distinctive architectural features of the famous Franciscan edifices.

All appointments in the Shrine have been custom-designed and crafted by expert artisans from various countries. The Sanctuary, Monstrance, Tabernacle, Sacred Vessels, Vestments, Reredos, Altar Rail, Crucifix, Vestry, Sacristy, Lecterns, Ambos, Confessionals, Vestibule, Stations of the Cross, statues of the El Divino Niño and Our Lady of Grace at the side Altars, bronze Great Doors and minor doors, nuns’ stalls, pews, and lower Church appointments were designed, constructed, and finished by Talleres de Arte Granda (TAG) in Madrid, Spain. TAG made all the appointments in Madrid, shipped them here, and provided the expertise and labor of installing them.

TAG also provided architectural consultation for the Shrine as well as designing the vaulting in the central and side nave aisle ways, the column capitals, the Piazza, the monument for the statue in the center of the Piazza, the Colonnade, and the facade of the Shrine. The facade includes Alpha and Omega emblems, portico entrances, and the central limestone rosette of adoring angels bearing the ‘Adoremus In Aeternum Sanctissimum Sacramentum’ shield. These words are the motto of the Poor Clares of Perpetual Adoration, and translate: ‘Let Us Adore for All Eternity the Most Blessed Sacrament.’

One of the most distinctive features of the Shrine is its marble paving, patterns, and accents. Marble was selected from the Carrara Brescia, Aosta (Italian Alps), Verona, Lucca, Sicilia, and Pietrasanta regions of Italy, as well as from Macedonia, Valencia in Spain, Brazil, South Africa, and Finland. The marble throughout the Shrine was fabricated in Italy by the Savema company in conjunction with TAG and Masonry Arts, Inc. of Bessemer, Alabama. The pristine white marble of the Sanctuary rises from a field colorful geometric patterns on the floors, columns, bases, and wainscot. Savema has created a magnificent European-style Church interior that provides a perfect setting from the gilded appointments made by TAG in Spain. Particular care was taken to suitably adorn the floor in the Vestry, where the priest vests for the Holy Sacrifice of the Mass. The Vestry features a large octagonal design in the center of its marble floor.

The marble floor patterns in the nave of the Shrine include inlaid crosses of red jasper, a semi-precious stone from Turkey that demands great expertise in cutting and fitting. Jasper was one of the materials requested by God for the ornamentation of the original Temple in Jerusalem. Forming the long, delicate points of the star-shaped designs required such precision that the Savema artisans had to cut some of the marble with a water jet to prevent it from breaking off. Installation of all the marble and other stone in the Shrine was carefully and expertly accomplished by local Alabama craftsmen from Masonry Arts.

The Altars, designed by TAG in Madrid, were fabricated in Italy with unparalleled skill by Savema, of Bianco Sivec marble from Macedonia. The capitals of the Altar pillars are of the same marble, hand-carved, and gold-leafed. The Altars are inlaid with mosaics of glass and gold, commissioned by Masonry Arts. The mosaics were created by artisans in Pietrasanta, Italy, using a 400 year old method of hand-chiseling and fitting.

The stained-glass windows were made by the studios of Gustav van Treeck in Munich, Germany, where they were custom-drawn, painted, and fired with the traditional Munich-style methods used for centuries by the finest Bavarian glassmakers.

The statue of the Divine Child Jesus in the Piazza was sculpted of statuary white marble from Carrara Italy. His Heart is carved from red jasper. The statue is patterned after a small plaster statue produced by the cloistered Carmelite nuns of Madrid.

The English-Tudor-style pavers of the border of the Piazza, Colonnade, and Esplanade, and the central herringbone pattern of the Piazza, were painstakingly laid under the direction of Masonry Arts by American and Brazilian craftsmen.

The Great Doors made of bronze are framed by limestone carbelled arches and columns, and are adorned with pictorial scenes of the Seven Joys and Seven Sorrows of the Blessed Virgin Mary. The transoms of the bronze minor doors to the North and South sides of the portico bear reliefs of Saint Francis and Saint Clare. Leading up to the portico are the steps and balustrades made of Giallo San Francisco granite from Brazil, inlaid with Verde Fontain from South Africa. The portico is ornamented with inlaid quatrefoils of Eagle Red granite from Finland.

Mother Angelica describes her own experience in building the Temple in the following words: "It’s unbelievable to me that, when our dear Lord asked for a Temple, and said that He would take care of those who helped us, I never in my wildest dreams thought it would be so beautiful. … At every turn He would change it. It got bigger and bigger, and more and more beautiful. We were going to put just ordinary floor tile in the Church; He guided us to put in marble. In every possible way He intercepted some of our ideas, and we could see what He wanted. And so this is truly a Church that God has built — a real Temple, a place where people can come and find rest for their souls, renewal for their faith, and an opportunity to receive the grace and peace, the forgiveness and the mercy that only God can give."

Everything listed above is open to the public. Other events as announced.

Out of respect for our Eucharistic King, we ask that those visiting the Shrine refrain from wearing shorts, tank tops, sleeveless shirts, and mini-skirts. If needed, temporary apparel is provided in the reception area.

CONNECT WITH Shrine of the Most Blessed Sacrament