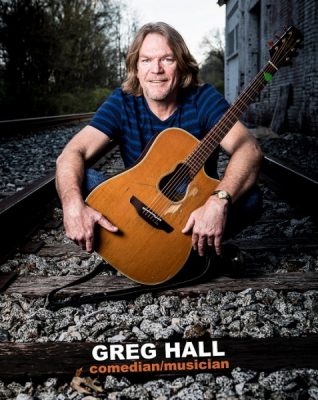 If you need some sweet music, hardy laughs and inspiration, please join us. Doors open at 6:45, show starts at 7:30. Cash or check only (we can’t take credit cards yet) $20 at the door. Bluff Park Shopping Center 585 Shades Crest Road, for more information contact us through Facebook or check us out on the website. Come early and make sure you get in.

Moonlight does not serve food or beverages so bring yourself a good bottle of wine (or some hard stuff) and snacks.

Standing 6’5”, Greg Hall’s dreams of winning the Triple Crown as a jockey were dashed by the tender age of four, so he picked up a guitar.  From the oil fields of West Texas, Hall’s redneck pedigree was established at fifteen.  His entertainment career began as a performing songwriter after winning a prestigious Kennedy Center award at the American College Theatre Festival for ‘Outstanding Achievement in Musical Composition’.

If there was an analogy of an artist, Hall is the accumulation of skill sets, often praised for his capacity to sound new and old at once.  As a comedian, he headlines Comedy Clubs around the nation.  As a musician, he has released four CDs, and has shared the stage with such artists as Shelby Lynne, The Fabulous Thunderbirds, Vern Gosdin, Keith Urban, Dan Seals, Kenny Logins, Michael McDonald, Eric Johnson and others.  With a quick wit, and guitar in hand, Hall creates his show around memories made public, through textures in song, and word.  Few are more conscious of life’s journeys.  With the stubbornness of a mule with a learning disorder, Greg Hall brings sweet and salty lyrics, laughter, mirth, and music to life.

$20 Cash or Check. No Credit Cards

Doors open at 6:45. Cash or check only. Bring your own beverages (alcohol) and snacks–Moonlight serves no food or beverages.

Moonlight on the Mountain