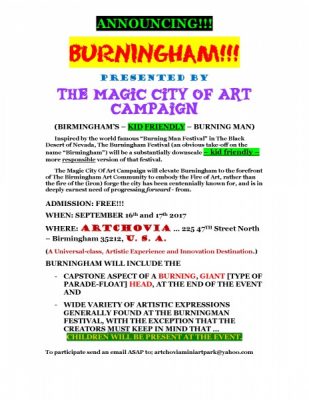 Presented by The Magic City Of Art Campaign at Unknown

BURNINGHAM – is inspired by the world famous “Burning Man Festival” in The Black Desert of Nevada, The Burningham Festival (an obvious take-off on the name “Birmingham”) will be a substantially downscale – KID FRIENDLY – more responsible version of that festival.

The Magic City Of Art Campaign will elevate Burningham to the forefront of The Birmingham Art Community to embody the Fire of Art, rather than the fire of the (iron) forge the city has been centennially known for, and is in deeply earnest need of progressing forward – from.

The YouTube video link (below) is of a smaller – scale-size – test run version of an eventually larger, 10 foot tall version of a float-type style of head that will be burned at the end of Birmingham [Alabama]’s first BURNINGHAM FESTIVAL (a KID FRIENDLY version of Burning Man) to occur September 16th and 17th, 2017 at ARTCHOVIA ART PARK – Birmingham, Alabama 35212. This smaller head, and the one at BURNINGHAM, will be an effigy of Sam Kilroy – The “Governor” of ARTCHOVIA – and will be 1/4 the size of the ENTIRE Burning Man figure in 1989.

HOWEVER … more than just a burning head the effigy of Sam Kilroy will come with additional, cool-fire, surprises!!! With THIS event Birmingham will start piercing the glass ceiling – but with fire! So make your plans to attend it now. For Birmingham, Alabama will FINALLY start becoming known for what it creates from THE FIRE OF ART – rather than the fire of the forge! BOOYAH!!!

So come planning on doing / creating whatever you’d expect to do at Burning Man – except become nude and / or display ANY form of nudity. THERE WILL BE CHILDREN PRESENT!!!