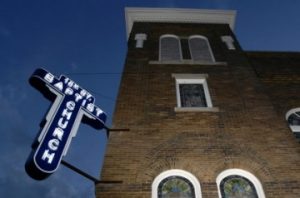 HISTORY: Organized in 1873 as the First Colored Baptist Church of Birmingham, Alabama. Sixteenth Street was the first black church in Birmingham. Initially, the congregation worshiped in a small building on the corner of 12th Street North and 4th Avenue and later moved to 3rd Avenue North between 19th and 20th Streets. In 1880 the congregation moved to its present location at 16th Street and 6th Avenue North. A modern brick building was erected in 1884 that established precedence for church building in the city.

Ordered by the City of Birmingham to tear down its building, the church officials commissioned Mr. Wallace Rayfield, the state’s only Black architect, to design a new church building. A native of Macon, Georgia, Mr. Rayfield had been raised in Washington, D.C. He received his education at Howard University, Washington, D.C. and Pratt Institute in New York City. The church, designed by him, was built at a cost of $26,000.00 under the supervision of T.C. Windham, a black contractor from Birmingham. Mr. Windham was a member and served, for a period, as Chairman of the church’s Trustee Board. The present church was completed in 1911. Of modified Romanesque and Byzantine design, it features twin towers with pointed domes, a cupola over the sanctuary accessible by a wide stairway, and large basement auditorium with several rooms along the east and west sides.

Because of segregation, the church, and other black churches in Birmingham, served many purposes. It functioned as a meeting place, social center and lecture hall for a variety of activities important to the lives of the city’s black citizens. W.E.B. DuBois, Mary McLeod Bethune, Paul Robeson, and Ralph Bunche were among many noted black Americans who spoke at the church during its early years. African-Americans from across the city and neighboring towns came to Sixteenth Street, then called "everybody’s church," to take part in the special programs it hosted.

Due to Sixteenth Street’s prominence in the black community, and its central location to downtown Birmingham, the church served as headquarters for the civil rights mass meetings and rallies in the early 1960’s. During this time of trial, turmoil and confrontation, the church provided strength and safety for black men, women and children dedicated to breaking the bonds of segregation in Birmingham, a city that black citizens believed to be the most racist in America.

The mass meetings held in Sixteenth Street, and in many other churches in Birmingham in May of 1963, resulted in marches and demonstrations that produced police retaliation and brutality, still painful to the memory of all who lived in the city and millions, who saw it reported on national TV news casts. Most of the marchers were school children and several thousand were arrested. Dr. Rev. Martin Luther King, Jr. and Rev. Fred L. Shuttlesworth provided inspirational leadership to the marchers during this chaotic time. The marches and demonstrations did break the bonds of public segregation in Birmingham. Sunday, September 15, 1963, at 10:22 a.m., the church became known around the world when a bomb exploded, killing four young girls attending Sunday School and injuring more than 20 other members of the congregation. Later that same evening, in different parts of town, a black youth was killed by police and one was murdered by a mob of white men. It was a shocking, terrifying day in the history of Birmingham and a day that forced white leaders to further come to grips with the city’s bitter racist reputation.

The tragedy of that Sunday produced outpourings of sympathy, concern and financial contributions from all parts of the world. More than $300,000.00 was contributed for the restoration of the damaged church. It was reopened for services Sunday, June 7, 1964. A special memorial gift–a large stained glass window of the image of a black crucified Christ–was given by the people of Wales, designed by John Petts. The window is located in the rear center of the church at the balcony level.

FOR MORE ON THE CIVIL RIGHTS DISTRICT IN BIRMINGHAM, SEE LISTINGS FOR:

FREE, by appointment only. Call to schedule a tour.