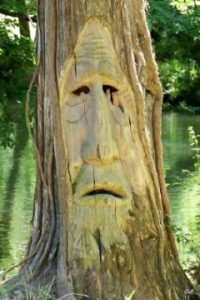 Presented by Montevallo Parks and Recreation at Orr Park

One of the most unique parks and nature preserves in the South is Orr Park, located just south of Birmingham in the charming city of Montevallo, Alabama. A beautiful preserve along Shoal Creek, the park features traditional amenities such as picnic tables, walking trails, a recreation center, ballfields and more. What really makes Orr Park unique, aside from its charming setting, is a unique effort by artist Tim Tingle to preserve the park’s ancient cedar trees.

Many of these old cedars were dying or had died and, despite their age, were destined for a meeting with a chainsaw. Tingle, however, saw potential in the old trees and over time transformed many of them into remarkable works of art.

As visitors roam the trails and woods of the park today, they are greeted with remarkable carvings of faces, figures, story book characters and even a dragon. They range along the park’s walking trail and were given to the people of Montevallo by Tingle. His gift has brought joy to many and astonishment to others.

The massive project, affectionately called Tinglewood, now includes over 30 sculptures It began in 1993 when a storm damaged many old trees at Orr Park. Tim Tingle (also a coal miner) sought permission from the city leaders to begin converting the damaged trees to works of art.

His vision quickly became a celebrated part of life in Montevallo and over time the number of carvings grew. He uses only dead trees, leaving the living ones to grow as part of the living forest.

Tingle’s massive outdoor creation of art at Orr Park is quite simply one of the most impressive sights in the South.

Orr Park is on Park Drive in Montevallo,
Alabama, just one block from Main Street. It
is open during daylight hours.