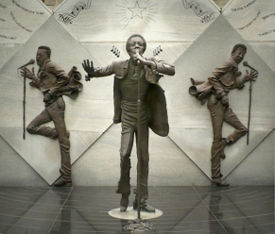 The Eddie Kendrick Memorial Park honors Birmingham native and Temptations lead singer Eddie Kendrick, who traveled the world but never forgot his Alabama roots. Sculpted by Ronald Scott McDowell, the Kendrick statue captures for eternity the magic moves of his Motown music. Inlaid in a granite backdrop behind Kendrick, the four other Temptations energize the work with their fine-tuned choreography. Born in Birmingham in 1937, Kendrick and the Temptations hit the top of the music charts in 1964 with “The Way You Do the Things You Do,” the first of 37 career Top Ten hits. Kendrick died in a Birmingham hospital in 1992. Eddie Kendrick Memorial Park is located at the corner of 4th Avenue North and 18th Street in Birmingham’s famed Civil Rights District, just a block from the Alabama Jazz Hall of Fame.