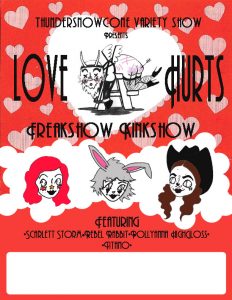 Thunder Snow Cone Variety show is back on the road! Join Philly’s #1 Cat Ice Cream themed circus for a show filled with incredibly weird and sexy acts, games and more

Thunder Snow Cone Variety show is based out of Philadelphia, PA and tours nationally. Our show is a blend of high energy acts that fall somewhere between Burlesque, Sideshow and Vaudeville, including Glass Walking, Feats of Strength, Hula Hooping, Ladder of Machetes, Human Blockhead, Balloon Swallowing, Human Stapling, Clown Burlesque, Games and more!

SCARLETT STORM– the Mistress of Whimsy and co-founder of Thunder Snow Cone! This clown darling and professional weirdo travels around the country bringing a tornado of touch-funny burlesque and stunning sideshow to stages in her path. She has been featured on the Gong Show (ABC), in Hustler magazine (march 2016) and in your strangest clown daydreams!

REBEL RABBIT -the boldest bunny babe in town! She will hypnotize you with her hips, hoops, ass and eyes. A mix of sassy, silly and sexy, this luscious lupine will have you ready to follow her down any hole.

TITANO ODDFELLOW– The 8th Wonder of the World! Titano is a world-record holder, title competitor and theatrical performer specializing in “Feats of Strength”, not seen since The Golden Era of Circus Sideshow and modern marvels of strength, never before seen by the human eye! Witness Titano Strongman perform strange, bizarre and mind-blowing acts that will amaze, entice and titillate the senses!” Sure to blissfully haunt memories for years to come! Titano has been featured on Americas got Talent, Oddities, National Geographic, various magazines including several tattoo magazines and Weird New Jersey. He holds eight world records including the heaviest beard lift in the form of a trapeze artist weighting 148.6 pounds, the heaviest septum lift at 43 pounds.