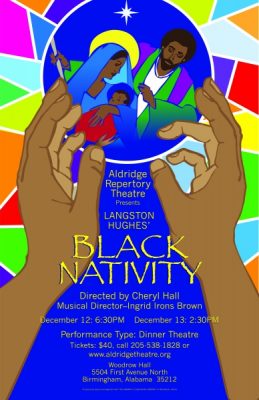 The Aldridge Repertory Theatre brings the production of Langston Hughes’ classic play “Black Nativity” to the stage once again. There will be two performances, December 12 at 6:30 p.m. and December 13 at 2:30 p.m. Both will be dinner theatre events presented at Woodrow Hall.

We are proud to present this beautiful production, which will feature an entire cast of Birmingham talent–singers, dancers, actors, directors and even the costume designer. The play has become an annual must-see event for families all around the Birmingham community, and for many who come from miles away.

The Aldridge Repertory Theatre was founded in Birmingham in 1984 to honor the late Ira Aldridge, who was a gifted and highly acclaimed African-American actor from 1807 to 1867. Due to segregation practices during that period, it was in Europe that Mr. Aldridge achieved the reputation as one of the world’s greatest Shakespearean actors.