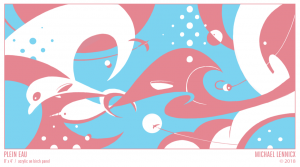 The Durbin Gallery at Birmingham-Southern College will feature the work of accomplished artist Michael Lennicx ’97 during its fall visual and performing arts season.

“Plein Eau,” on view Nov. 9-28, is an aquatic investigation of groovy, dynamically flowing futuristic line in spacial collision with mid-century kitsch—where rarified air meets viscous liquid in the salty inner spaces of the microverse. “It examines the relationship of eau to air, above with below, improvisation to arrangement, and calm with chaos in an absurdist, ever-evolving harmonic dance where nature reclaims its rightful command over man,” according to a statement by the artist.

Lennicx is an acclaimed American artist and creator, whose mediums range from fine art, conceptualism, and illustration to animation and functional design. His handiwork has been seen in more than 40 different titles in the television, film, and game industry, including multiple Emmy Award-winning shows. He graduated from BSC with a bachelor of fine arts degree and is now self-employed.

Lennicx will give an artist’s talk reflecting on his work and career at 11 a.m. on Thursday, Nov. 8, in the Kennedy Art Center Lecture Hall on campus. An opening reception for “Plein Eau” will be held on Nov. 9 from 6-8 p.m. in the gallery. The exhibition, opening reception, and lecture are free and open to the public.