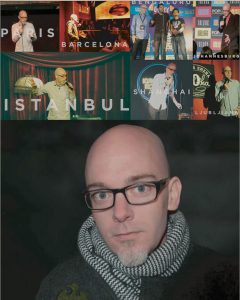 BAD FAMILIAR A Stand Up Comedy Hour By Matt Davis

Matt’s been performing for 20 years in America & around the world and he’s back with his first show in the Southern US in more than 6 years!

A COMEDY SHOW [FOR THE UNCERTAIN] [ABOUT FAVORING THE UNFAMILIAR]

The sixty minute show follows the evolution of veteran performer Matt Davis’ ideas as they have developed while performing and traveling through over 250 cities across more than 40 countries. It’s a hilarious and fun evening of challenging ideas as Matt presents an outsider’s voice on topics from the grandiose to the banal. While joking about even the largely accepted norms of language, nationality, and global or regional customs, he interweaves laughable experiences with sobriety, censorship, and the dangers of relative social norms.

It is a highly personal narrative where Davis is often playing the fool: a foil to his own ideas, the world-traveled performer offers up a studied cross-examination of his experiences; all with the single aim to dismiss, mock, and laugh-at the equation “familiar equals good.”