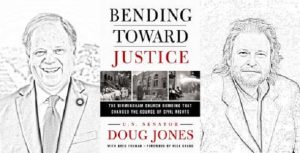 One of the most horrible terrorist acts in American history occurred on Sunday morning, September 15, 1963. Four innocent little girls were murdered, and twenty-two others injured when a bomb exploded right before worship service at The Sixteenth Street Baptist Church in Birmingham, Alabama.

Although the FBI suspected four Ku Klux Klansmen, the case was closed without any indictments. In 1977, Alabama Attorney General Bill Baxley reopened the case, and one of the bombers was convicted. One of the suspects passed away in 1994.

This outrageous miscarriage of justice, nearly forty years in the making, was corrected when U.S. Attorney Doug Jones tried and convicted the final two guilty men in 2001 and 2002. In 2017, Doug Jones went on to win election as Alabama’s first Democratic Senator in twenty-five years.

Now, for the first time, Senator Jones tells the story of that defining era and the trial that captured the attention of the world. Bending Toward Justice is destined to become a classic of civil rights history.

You are invited to the nationwide launch to see and hear Senator Doug Jones and Rick Bragg, who wrote the foreword to the book. Rick will introduce the Senator, and then serve as moderator for the entire program.

Admission is by ticket only. Tickets are $29.99 and come with a signed first edition of the book. Seating is limited. The program begins at 2:30, and doors open at 1:30.