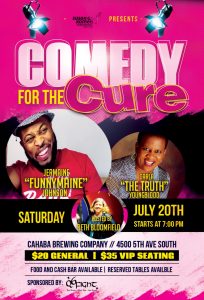 Comedy for the Cure

An Evening of Fun and Laughter…for a Great Cause – featuring Jermaine “FunnyMaine” Johnson!

An Evening of Fun and Laughter…for a Great Cause!

For more information on this event, contact the Komen Community Office at 205.263.1700 or info@komenNCalabama.org.

Headliner: Jermaine “FunnyMaine” Johnson was born in Opelika, AL. FunnyMaine is a lifetime class clown and a professional comedian since 2005. His talent has taken him from small stages, to large arenas, television and radio. He’s featured for Kevin Hart, Steve Harvey, Rickey Smiley, Tony Rock, Tommy Davidson and many others. FunnyMaine is perhaps best known for his online college football videos, where he’s turned the ups and downs of Crimson Tide fandom into an art form. He was recently the subject of an article in the Birmingham News: https://www.al.com/alabama/2019/05/funnymaine-keeps-rolling-with-crimson-tide-comedy.html.

Feature: Carla “The Truth” Youngblood was born in Birmingham, AL and is a professional comedienne and motivational speaker providing encouragement and joy with humor. Carla takes pride in being a comedienne who tells it like it is, hence the stage name “The Truth”. In October 2015, when she was diagnosed with breast cancer….she had to talk about. “It is my therapy” says Youngblood. After having 16 rounds of chemotherapy, a double mastectomy and 28 treatments of radiation, she created a show titled “The Truth” about Breast Cancer where she shares her experiences in a unique and hysterical way. This show lead to her being featured on Inside Her Story with Jacque Reid on the nationally syndicated Tom Joyner Morning Show!

Host: Beth Bloomfield was born & raised in Chicago but has lived in New York and more than 20 years in Los Angeles. She’s now bringing the funny in Birmingham, AL. She is the co-founder/co-producer of Grown Up Comedy, which hosts a weekly stand-up comedy open mic show in Hoover and a monthly showcase in Vestavia Hills featuring comics from throughout the South. Beth’s brand of comedy has been described as that of the soft-spoken, intelligent but wickedly funny “square.” Her comedy stems from sharp writing and jokes that spring from everyday life and love, as well as her non-Southerner’s fresh take on living in the South.

Tickets available online or at the door.