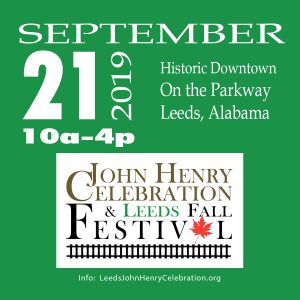 Make plans now to bring your entire family to the John Henry Celebration and Leeds Fall Festival in historic downtown Leeds, Saturday, September 21st from 10 am to 4 PM, rain or shine.  Admission and parking are absolutely free.  Alabama Tourism previously named this festival one of the top 10 tourism events in Alabama during the month of September.  This Alabama Bicentennial event will feature free performances of the original John Henry Play, stage entertainment, street vendors, car show, food trucks, professional storytelling, roaming street performers and much more.  For complete entertainment and activity information for this spectacular event, please visit www.LeedsJohnHenryCelebration.org.

Leeds, AL-Make plans now to bring the whole family to the John Henry Celebration & Leeds Fall Festival in historic downtown Leeds, Alabama on Saturday, Sept. 21, 2019 from 10 a.m. to 4 p.m., rain or shine. Admission and parking are free to the public.

The Alabama Tourism Department previously named this festival one of the top 10 tourism events in Alabama during the month of September.

Previously known as the Leeds Downtown Folk Festival, the name was changed to better reflect the event’s purpose of promoting Leeds and bringing people to historic downtown Leeds on the third weekend of September.

According to Fall Festival planning committee, the outdoor event will feature great food, a variety of live music on multiple stages, entertainment, art, a car show and lots of activities for children, young people and those young at heart.

And, after a several year hiatus, this year’s festival will feature two free performances of the original play by Marie Cromer about John Henry, “Listen to that Cold Steel Ring” on Sept. 21 at Leeds Theatre and Arts Center.  Henry, an African-American railroad man, is believed to have died after winning a contest against a steam drill as the company he worked for blasted tunnels through mountains south of Leeds in the 1880s.

Activities at Leeds historic railroad depot will include a John Henry short film, African-American Gospel Choirs featuring Birmingham Youth Fellowship Choir.  Tours of the Depot will be provided by the Mid-South Chapter of the Railway & Locomotive Historical Society.  The Historical Society Stagecoach will be on display.  John Garst, Author of John Henry and His People, is scheduled for a discussion time.  The John Henry statue project with Branko Medenica, famous Sculptor, will be featured with his illustration.  A Children’s Art display will also depict the era.

Folk and country singers are scheduled on the gazebo stage throughout the day. Other activities include Professional Storyteller Elizabeth Vander Kamp, Alabama 200 Bicentennial speaker Guy Hubbs, roaming street musicians and the High Striker competition for children and adults.  There will be plenty of kid’s activities like bouncy house and games.  Craft, food and entertainment vendors will line the street.  A dining and resting tent will be available on Parkway.  Rails and Ales will have transport available for those who want to watch football games.  Dixie Vintage Antique Automobile Club will lead the way with the car show.

It’s definitely a jammed packed day of fun, inspiration and historical education that you will not want to miss and a wonderful opportunity to learn more about John Henry, the folk hero.

Leeds is conveniently located about 15 miles east of Birmingham, 45 miles west of Anniston and 60 miles southwest of Gadsden. The festival site in historic downtown Leeds is only two miles south of I-20 Exit 140. Locals and visitors alike are invited. Bring a folding chair and stay all day!

For more information about this spectacular event and entertainment/event schedules, please visit www.LeedsJohnHenryCelebration.org.  If you would like to speak to a festival organizer, please contact Stephanie Corwin with Leeds Redevelopment Authority at 205.601.0772 or Stephanie.LeedsRDA@gmail.com.