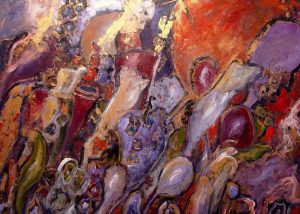 Accomplished Alabamian artists, Susan Oliver and Ben South return to the Grand Bohemian Gallery at the Grand Bohemian Hotel in Mountain Brook with a dual exhibition, unveiling the latest evolution of their signature yet diverse botanical styles.

On October 11th, fall down the rabbit hole with Susan Oliver and Ben South as the Grand Bohemian Gallery presents “EverWonderLand”, a magical garden of creativity and imagination. New works from both artists will fill the gallery show walls and sculpture garden.

Susan Oliver, Birmingham native, has achieved international stature, exhibiting her vibrant, texture-rich acrylic paintings at the Festival of the Arts in Vienna and private collections worldwide. Most recently, Oliver’s work is represented by the Grand Bohemian Gallery, and she is an obvious choice for Birmingham corporate commissions. Her style reflects a “joie de vivre” and love for travel, which first introduced her to the boldness of the original expressionists. Educated viewers are quick to note that Oliver pays homage to household names such as Kandinsky in her signature abstractions and jewel-tone color palette.

“Everwonderland” would not be complete without its Master Gardener, “The Southern Colorist” that is Ben South. His oeuvre weds the sophistication of French Post-Impressionism and the simplicity of southern folk art. Accurately described by the same traits defining the perfect southern gentleman, Ben’s work is refined yet playful, witty, and never forgets its roots. You won’t want to miss the newest blossoms from South’s cerebral garden.