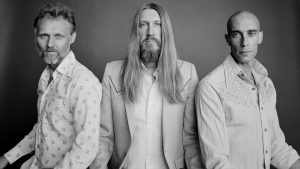 The Wood Brothers show originally scheduled for May 20, 2021 at the Lyric Theatre has been rescheduled for December 9, 2021. Tickets for the original date will be valid for the rescheduled date.

Kingdom In My Mind’ follows The Wood Brothers’ most recent studio release, 2018’s ‘One Drop Of Truth,’ which hit #1 on the Billboard Heatseekers Chart and garnered the band their first GRAMMY nomination for Best Americana Album. NPR praised the record’s “unexpected changes and kaleidoscopic array of influences,” while Uncut hailed its “virtuosic performances and subtly evocative lyrics,” and Blurt proclaimed it “a career-defining album.” Tracks from the record racked up roughly 8 million streams on Spotify alone, and the band took the album on the road for extensive tour dates in the US and Europe, including their first-ever headline performance at Red Rocks, two nights at San Francisco’s legendary Fillmore (captured on their 2019 release, ‘Live At The Fillmore’),and festival appearances everywhere from Bonnaroo to XPoNential.