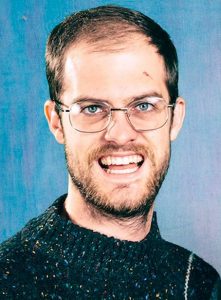 'I did it all by myself!' A Conversation with Dani...

A virtual workshop and interactive session with the co-director of Swiss Army Man and director of The Death of Dick Long.

Daniel Scheinert will discuss the collaborative nature of film, mock the limits of auteur theory, celebrate collaborators who play a role in his work, and brainstorm with audience members about how to find their own collaborators. This livestreamed workshop will be co-hosted by Kiwi Lanier, Education and Outreach Coordinator for Sidewalk Film Center + Cinema.

An Alabama native, Daniel Scheinert is a writer, director and actor best known for the feature films Swiss Army Man (2016) and The Death of Dick Long (2019), and the music video for DJ Snake and Lil Jon’s “Turn Down for What” (2014). With Swiss Army Man, Scheinert won the award for Best Directing at the 2016 Sundance Film Festival, and The Death of Dick Long, filmed in Bessemer, AL, was named Best Alabama Film at the 2019 Sidewalk Film Festival. Scheinert is also the director of an interactive documentary titled The Gleam, which profiles the long-running newspaper of record for Guntersville, AL.

Questions for Scheinert to answer during the workshop can be emailed to Reading Series director Katie Boyer (kboyer@jeffersonstate.edu) by July 13.

Tickets are pay-what-you-can, with levels at $0, $10, and $20. Register through the Sidewalk website here. Participants will be emailed a Zoom link 30 minutes before the workshop’s start time. Registration closes at 6:30 PM central on 7/14/20.

Participants will be emailed a Zoom link 30 minutes before the workshop’s start time. Registration closes at 6:30 PM central on 7/14/20.