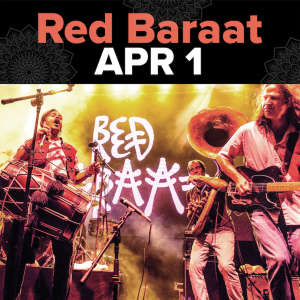 Join us at 7 p.m. CT on Thursday, April 1, for a streamed concert starring Red Baraat, live from the ASC for one night only!

Join us at 7 p.m. CT on Thursday, April 1, for a streamed concert starring Red Baraat, live from the ASC for one night only!

RED BARAAT is a pioneering band from Brooklyn, New York. Conceived by dhol player Sunny Jain, the group has drawn worldwide praise for its singular sound, a merging of hard-driving North Indian bhangra with elements of hip-hop, jazz and raw punk energy. Created with no less a purposeful agenda than manifesting joy and unity in all people, Red Baraat’s spirit is worn brightly on its sweaty and hard-worked sleeve.

2018 also saw the band touring Kazakhstan, Abu Dabhi, United States, Canada and Europe. They headlined the renowned WOMAD Festival in Cáceres, Spain, in front of 10,000 people, performed the Vienna Konzerthaus (Philharmonie) in Austria and had the crowd jumping at Rudolstadt Festival in Germany.

The release of Red Baraat’s second album in 2013, “Shruggy Ji,” debuted at No. 1 on the Billboard World Music charts in the USA and propelled the band on a world tour that has yet to stop. They have performed at Bonnaroo, Austin City Limits, WOMAD, globalFEST, Lincoln Center and New Orleans Jazz Fest, along with clubs, theaters and arts centers. Along the way, they sold out rooms as diverse as the Luxembourg Philharmonic and New York City’s legendary rock club Bowery Ballroom, and performed at the request of the White House (Obama), TED and Olympic Games.

TICKET INFORMATION
This event is FREE and open to the public.