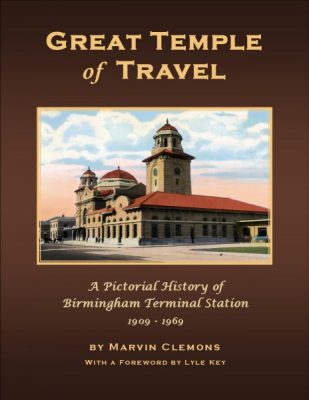 The Bessemer Hall of History Museum is pleased to present a book signing event featuring Marvin Clemons, author of Great Temple of Travel. A native of Jacksonville, Florida, as a young teen Marvin moved to Birmingham and quickly discovered the district’s abundant railroads.  He was captivated by the grandeur of Birmingham’s Terminal Station and its colorful passenger trains, and during his junior year in high school he landed his first railroad job working part-time as a towerman-operator controlling train movements through the station.

Following graduation from high school in 1965, Marvin transferred to Atlanta and worked as a towerman for Atlanta Terminal Station and briefly for the Missouri Pacific Railroad before being called to active military duty, serving as an Army officer during the Vietnam Conflict.  Returning to Birmingham following discharge from the Army, he majored in journalism at the University of Alabama in Birmingham and wrote for the Birmingham Post-Herald as the paper’s transportation editor.  He later earned his master’s degree in counseling at UAB, and became a licensed professional counselor in private practice.

While pursuing his profession, Marvin continued to explore his interest in railroads as a writer, photographer, and historian. In 2007, he co-authored and self-published Birmingham Rails—The Last Golden Era with Lyle Key, a fellow Birmingham rail fan and retired railroad executive.  The book was well received by both railroad enthusiasts and the general public, and in 2009 it was awarded the George Hilton Book Award by the Railway & Locomotive Historical Society.

Following publication of Birmingham Rails, Marvin helped found the Mid-South Chapter of the Railway & Locomotive Historical Society at the historic 1884 Southern Railway depot in Leeds, Alabama, serving as the Chapter’s first president and chairman of the board.

Over the years, Marvin pursued his love for Terminal Station. In Great Temple of Travel, a first book-length history on Birmingham’s Terminal Station, Marvin has gathered extensive documentation and assembled scores of photographs and illustrations to edit and publish a colorful tribute to the once “great temple of travel.”

Come and enjoy all The Bessemer Hall of History Museum has to offer! All Aboard!!