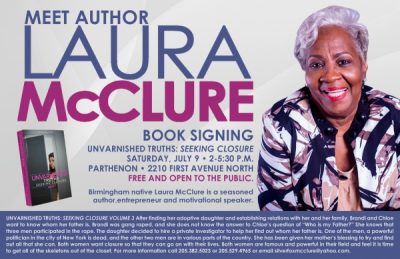 Presented by Major Occasions, LLC at The Parthenon Conference Center

McClure always wanted to be a published writer, but she always had a fear of stepping out and making her dream a reality. At the age of 70, Laura finally found the courage to pursue the vision implanted in her and became a published writer, using the pen name, Laura McClure.

On July 9, McClure’s fourth book, “Unvarnished Truth: Seeking Closure,” will be released. She will hold a book signing at 2:00 pm at the Parthenon, 2210 First Ave. North in downtown Birmingham.

The book is an urban fiction about a woman finding her adoptive daughter and establishing relations with her and her family.  Brandi and Chloe want to know who her father is. Brandi was gang raped, and does not know the answer to Chloe’s question of “Who is my Father?” She knows that three men participated in the rape.  The daughter decided to hire a private investigator to help her discover the answer.

One of the men, a powerful politician in New York City, is dead, and the other two men are in various parts of the country. Chloe has been given her mother’s blessing to try and find out all that she can. Both women want closure so that they can go on with their lives.

Brandi and Chloe, both women are famous and powerful in their field, and feel it is time to get all of the skeletons out of the closet. “Unvarnished Truth” allows readers to participate in their journey of discovery.