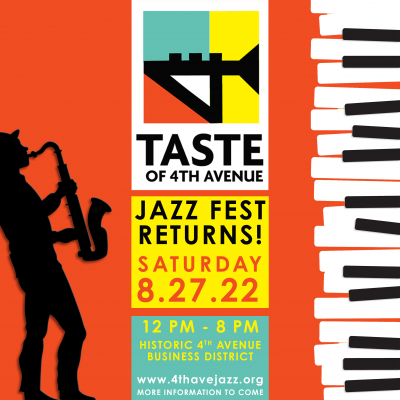 After a two-year hiatus, due to COVID-19, the Taste of 4th Avenue Jazz Festival will be returning to Birmingham’s Historic 4th Avenue District Downtown.  Since 2003, the festival has remained one of the most anticipated events of the summer bringing together artists, vendors, and the entire community for food, fun and tons of entertainment. The Taste of 4th Avenue Jazz Festival is organized and managed by Urban Impact, Incorporated, a non-profit 501c3 organization and is FREE and open to the public.

As a hub for Black commerce and culture during the days of segregation, the historic 4th Avenue Business District is one-of-a-kind. The district set the scene for the tastemakers of yesterday and stands today as a testament to the resilience of a people. Seeking to celebrate the spirit of the district, the Alabama Jazz Hall of Fame, inspired by the “Taste of Chicago,” launched the first Taste of 4th Avenue Jazz Festival in 2003. Now approaching its 19th year, this one-day event has become a popular summer staple and continues to be presented at no cost to attendees, in collaboration with Urban Impact, Inc. and the Taste of 4th Avenue, Inc’s Board.