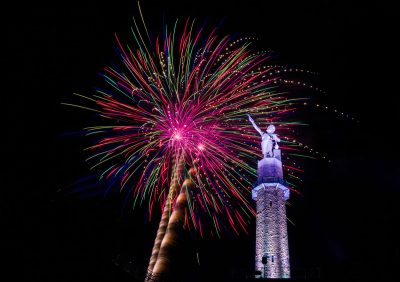 Thunder on The Mountain

On July 4, the City of Birmingham welcomes all to visit and watch live a breathtaking show in honor of those who have fought for our country’s independence. Those in the Birmingham viewing area can also tune into WBRC Fox 6 for live stream.

Spectators can listen to the soundtrack exclusively on iHeart media radio stations 102.5 The Bull, 103.1 The Vulcan, 103.7 The Q, 104.1 The Beat, Birmingham’s ALT 991, B106.5, 105 Hallelujah FM, Magic 96.5, News Radio 960 WERC, News Radio 105.5 WERC and also on La Jefa 98.3.
At approximately 9 p.m., the first of more than 2,500 shells and effects will brighten Vulcan and the sky above him. A unique score featuring artists such as James Brown, Imagine Dragons and Neil Diamond plus a special tribute to The World Games 2022 sponsored by Blue Cross Blue Shield will be expertly timed and choreographed to the colorful firework display, making it the biggest show Vulcan has put on to date. There will also be a selection of songs as a tribute to the city.
Thunder on the Mountain is presented by Hibbett | City Gear, Medical Properties Trust and UAB Callahan Eye Hospital. Vulcan Park & Museum organized this event with our corporate partners Protective, Regions Bank and Vulcan Materials Company with additional support from City of Birmingham, Greater Birmingham Convention and Visitors Bureau, City of Homewood, Pyro Shows of Alabama, La Jefa 98.3, iHeart Media Birmingham including Magic 96.5, News Radio 105.5, WERC, 103.7 The Q and 102.5 The Bull; and WBRC Fox 6 News.

This is a free event. No tickets are necessary.

Vulcan Park and Museum will close at 6 p.m. on July 4 to prepare for the show.  For more information and tips on viewing, log onto www.visitvulcan.com.