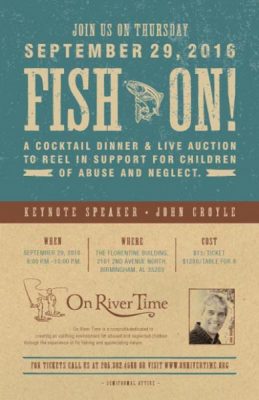 Fish On! Fundraiser: Reeling in Support for Abused...

Presented by On River Time at The Florentine

On River Time will host its third annual Fish On live-auction and dinner at the Florentine building in downtown Birmingham on September 29 from 6:00 – 10:00 p.m. All proceeds go toward expanding the nonprofit’s year-round impact on children who have suffered abuse and neglect. Crimson Tide football legend and Founder of Big Oak Ranch, John Croyle, will be the keynote speaker. Tickets and tables are available here.

“Every year, this event encourages us to reach for big-picture goals,” said Executive Director, Jeana Durst. “We receive a range of positive feedback— from some who relate quite personally to the mission and perhaps are just now hearing about us and from others who see how their generosity from the previous year has been a blessing to the campers this year.”

In only five years On River Time has grown from a three-day fly fishing adventure for several lucky children to a year-round source of inspiration and hope for dozens who have suffered through difficult life circumstances. ORT now hosts two five-day camp experiences with guided fly fishing, devotionals, conservation education, and even service work. The organization communicates with partner organizations year round to cultivate a sense of family and support, provides scholarships, and hosts cookouts with fishing tutorials. This year, 24 young people attended camp in two sessions, and ORT broke ground on a “Fish On” camp cabin. “Without the generous donations it received at the previous Fish On fundraisers, none of this would be possible,” said Durst.

This year’s Fish On live auction, conducted by Guin Robinson, will build on the enthusiasm of past years’ attendees for tax-deductible trip packages. Guests will have a choice of dining packages, weekend getaways closer to home or international trips to places such as Italy and Ireland. And of course there will be fly fishing packages. Dinner, served by the Florentine catering staff, will be included with ticket purchases. John Croyle, whose Big Oak Ranch has sent campers to ORT each year, will deliver a keynote speech regarding his impressions about the growth and impact of the organization.