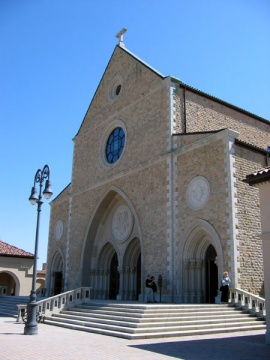 When pilgrims visit the Shrine of the Most Blessed Sacrament, many ask: "How did it all begin?" The answer to this question comes as a surprise to many … the Lord used a business trip to bring about this marvel of His Divine Providence.

In 1995, Mother M. Angelica was traveling in South America on business for EWTN (Eternal Word Television Network). A Spanish television network was in the works for Latin America, where so many Catholics were losing their faith. So Mother traveled with two of the nuns to ask for the support of the Bishops and Nuncios.

Colombia was among the countries that Mother visited on this trip. In Bogotá, a Salesian priest – Father Juan Pablo Rodriguez – brought Mother and the nuns to the Sanctuary of the Divine Infant Jesus to attend Mass. After Mass, Father Juan Pablo took them into a small Shrine which housed the miraculous statue of the Child Jesus.

Mother Angelica stood praying at the side of the statue when suddenly the miraculous image came alive and turned towards her. Then the Child Jesus spoke with the voice of a young boy: "Build Me a Temple and I will help those who help you." Thus began a great adventure that would eventually result in the Shrine of the Most Blessed Sacrament, a Temple dedicated to the Divine Child Jesus, a place of refuge for all.

After coming home from the trip, Mother Angelica shared this story with the nuns. At once, they began to look for land. After several months of searching, they came to Hanceville, Alabama. The property is an isolated piece of farmland almost completely surrounded by a river. It had previously been used to farm soybeans. From the very first moment that she set foot on the land, Mother Angelica says that she "felt the Presence of God very strongly."

From the very beginning of this adventure, the Providence of God was clearly evident. The nuns had no money to build, but they never tried to raise funds for the cause, but rather trusted in the Divine Providence of God. EWTN had no participation whatsoever in paying for any part of the Temple. It was totally the project of Our Lady of the Angels Monastery.

The Lord wished to manifest His loving Providence yet again by inspiring five families to financially assist with the building of the Shrine. Each family wished their donations to remain anonymous. And, the Child Jesus kept His promise to "help those who help you."