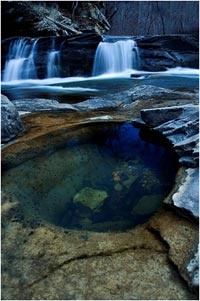 Turkey Creek Nature Preserve was established through a partnership between Alabama’s Forever Wild Program and the Freshwater Land Trustand is co-managed by the Southern Environmental Center (SEC). In late 2008, an agreement was reached with the SEC to setup an environmental education center at the entrance to the preserve. The SEC opened this facility on May 9, 2009 and provides school groups, scout troops, and others with hands-on educational programming.