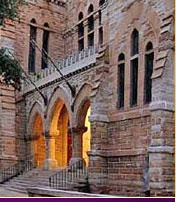 The Church of the Advent strives to serve God in Jesus Christ by reaching out from the center of the Birmingham community through evangelism and mission. The 3,800-member congregation comprises one of the largest Episcopal parishes in the United States, and the church serves as the cathedral for the Episcopal Diocese of Alabama.

The Domestic and Foreign Missionary Society of the Protestant Episcopal Church in the United States of America, also known more recently as The Episcopal Church (TEC), is an American branch of Anglicanism – those churches planted throughout the world by the Church of England. An independent church since 1789, it holds to the basic doctrine of the Church of England as contained in the Holy Scriptures of the Old and New Testaments, the three historic creeds (Apostles, Nicene and Athanasian), the Book of Common Prayer and the Apostolic Succession of Bishops. There are about two million members of the Episcopal Church and 77 million Anglicans worldwide, making Anglicanism the third largest Christian body, after Roman Catholicism and the Eastern Orthodox Churches.

The Advent warmly welcomes all.