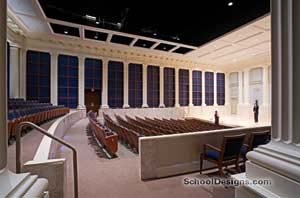 Jane Hollock Brock Hall was dedicated in October 2006 and named for the wife of longtime Samford trustee and supporter Harry B. Brock, Jr. Brock Recital Hall is home to the Davis Architects Guest Artist Series, the Alabama Symphony Orchestra Concertmaster and Friends, and the SuperJazz Big Band, as well as the numerous ensembles wtihin the Division of Music. Brock Hall houses a 300-seat recital hall, a rehearsal suite for Samford orchestral and band programs, and an instrumental teaching center. The centerpiece of the nearly $9 million building is the recital hall with its state-of-the-art acoustics.