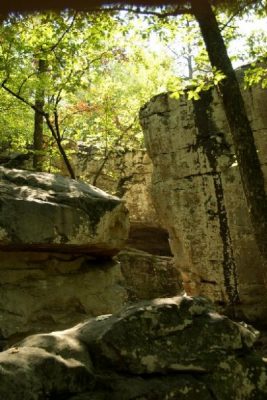 A perfect balance of nature and community, Moss Rock Preserve is a beautiful 250 acre nature preserve abundant with trees and plants, rock outcroppings, streams, waterfalls, wildlife and other unique natural features. Currently Moss Rock Preserve is home to four rare species of plants and a rare variant of Little River Canyon Sandstone Glade – one of only 35 occurrences known around the world!

Moss Rock Preserve’s Boulder Field is a favorite among rock climbers. With numerous technical formations, these boulders appeal to climbers of all skill levels. The City of Hoover is fortunate that these and other natural features exist in Moss Rock. As such, Moss Rock Preserve has been dedicated as a nature preserve in order to insure its long-term survivability.

Nearly 10 miles of hiking footpaths have been constructed within Moss Rock Preserve. These paths allow visitors and nature enthusiasts to witness the beauty of Moss Rock up close and personal. Trail construction and maintenance as well as other general maintenance items within Moss Rock are being carried out primarily by dedicated groups of volunteers. Groups like the Friends of Moss Rock Preserve; Southeastern Climbers Coalition; Ruffner Mountain Nature Center; Americorps; Boy Scouts of America; Hands on Birmingham; and various church and civic organizations have all graciously dedicated their time to improving Moss Rock. Hoover appreciates each of you!

If you are interested in volunteering at Moss Rock Preseve and/or if you would like to be added to the email list of Moss Rock volunteers, please contact the City of Hoover by phone at (205) 739-7141 or by email at connerc@ci.hoover.al.us