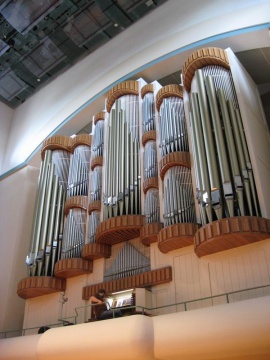 The Concert Hall is the centerpiece of the Moody Music Building.  The Frank M. Moody Music Building is the home of UA’s School of Music and has 105,000 square feet of floor space used for rehearsal rooms, a recital hall, a media center, research labs for music education and therapy, and studios equipped for electronic and computer music among other things.

The building also contains a 1,000-seat concert hall, patterned after the home of the Vienna Philharmonic, and a Holtkamp organ which stands three stories high with four manuals. The flowers, trees, and benches of the building’s large courtyard complete the picture of a modern facility in a graceful setting.

The Moody Music Building is named for Frank Maxwell Moody, an 1897 UA graduate who went on to become a Tuscaloosa banker and dedicated community leader. The building opened in 1988 with a series of concerts that included a performance by Metropolitan Opera soprano Marilyn Horne.