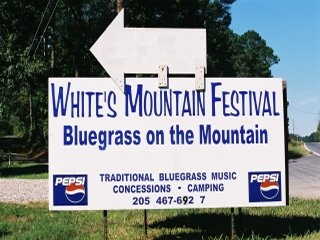 St. Clair Springs, Alabama, known in years past as Cornelia, has a vivid and well documented historical reputation for the presentation of old music and good times. As a resort/recreation town, St. Clair Springs was flooded by summertime visitors who enjoyed the quiet gatherings around the mineral springs which gave the town its name. These gatherings were usually quite and orderly until some of the rowdier boys of the time would start sipping liquids other than spring water. As was inevitable

St. Clair Springs, Alabama, known in years past as Cornelia, has a vivid and well documented historical reputation for the presentation of old music and good times. As a resort/recreation town, St. Clair Springs was flooded by summertime visitors who enjoyed the quiet gatherings around the mineral springs which gave the town its name. These gatherings were usually quite and orderly until some of the rowdier boys of the time would start sipping liquids other than spring water. As was inevitable the action rapidly escalated from mere verbal discussions to more strongly emphasized points of view. The resulting display of these four or five half-grown boys wrestling in a mineral spring quickly dispersed the milder-mannered visitors back to their quieter places of interest, to await another visit to the spring.

The two hotels of the town were often full by mid-day on Saturdays, but the side yards around them as well as the private dwellings often sprouted tents as the crowds were determined to stay the weekend. The shortage of lodging being of minor importance to many visitors, the few privately owned automobiles and the hack driven by Mr. Raymond Rodgers, transported and unloaded visitors into town at a rapid pace and the after sundown activities began to gain momentum.

The main attraction to St. Clair Springs was the lure of the medicinal values of the mineral springs but the recognized benefit derived by the great times of laughter and frivolity soon established a huge reputation. The dance pavilion where the local bands would often play until the morning hours was a favorite gathering spot. There was an adjoining swimming pool which has since disappeared along with the pavilion building but one important aspect of this scene did not go the way of the original lure of St.Clair Springs.

At the Rodgers’ home beside the one room schoolhouse, Friday night signaled the start of the weekend pickin’ activities. This home grown music found an ageless continuation of its existence in the instruments of the Rodgers’ family. The group consisted of Graves playing fiddle; Jim, guitar; Jody, harmonica; Bill, mandolin; and Raymond did the vocals as the remainder of the family and the neighborhood visitors listened and feasted on great home cooked food. The whole beef or hog had been cooking for hours over the glowing pit in the backyard and as the visitors arrived on Saturday, it was nearing tasteful and aromatic perfection. The size of the crowd and the sounds of the music were at anticipated levels by this time and the pickin’ was in full swing

Ageless music has always been a part of our American Heritage and will be forever. The old grass roots version has many names; mountain music, country music, hillbilly music and Mr. Bill Monroe called it Bluegrass, but a short distance up the hollow from where the old St.Clair Springs dance pavilion used to be there is a place where this old music is still very much alive and performed. Pickers and listeners come from all over to share the total experience provided by great music, great surroundings, great company and delicious food.

White’s Mountain Bluegrass Park, in the beautiful hills of St. Clair County, Alabama, strives to preserve these same traits for present day music lovers. Although lots of things have changed since the heydays of St. Clair Springs, visitors to White’s Mountain at St. Clair Springs come for some of the same reasons. Motor homes and RV’s instead of Model”T’s” and horse drawn hacks transport visitors to the mountain as motels and campers of all sizes house them, the same desire to hear the old music is as strong as ever.

Just as the same musical instruments are played, the same laughter and good company generate therapeutic effects for all who attend these gatherings. On Friday and Saturday nights of the festivals as the mists collect in the huge hollow between the White’s Mountain stage and where the old dance pavilion used to be, some folks will tell you that faint images appear along the tree line beside the stage. While the band on stage plays “SallyGoodin”, and the buck dancers dance, the images become clearer as if their interest in the music draws them from a time long past. Even though the apparel worn by these visitors is pre-nineteen thirties one carries an F-5 Gibson mandolin, one a D-28 Martin and one an old black fiddle while the gold plated Mastertone carried by the fourth one gleams brightly.

The instruments that they carry and the music that drew them to this place positively identify these visitors. The tradition is still very much alive at Whites’ Mountain in St. Clair Springs. 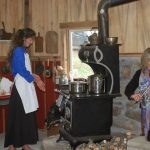 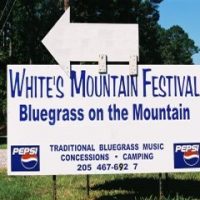