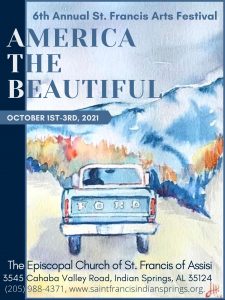 Everyone is cordially invited to the 6th Annual St. Francis Arts Festival to be held on October 1-3, 2021 at The Episcopal Church of St. Francis of Assisi in Indian Springs, Alabama. Entitled America the Beautiful, the festival aims to explore and highlight the wonderful mosaic of American culture through family-friendly performances and activities including music, poetry, visual arts, and children’s events. The

Everyone is cordially invited to the 6th Annual St. Francis Arts Festival to be held on October 1-3, 2021 at The Episcopal Church of St. Francis of Assisi in Indian Springs, Alabama. Entitled America the Beautiful, the festival aims to explore and highlight the wonderful mosaic of American culture through family-friendly performances and activities including music, poetry, visual arts, and children’s events. The festival is open to the larger community and offers something fun and exciting for everyone, including a free community screening of the iconic movie West Side Story (1961).

Individual passes (covering all events) are $30; family passes (for up to 4 people) are $50. Passes can be purchased at st-francis-music-academy.ticketleap.com/6th-annual-st-francis-arts-festival-america-the-beautiful.
Please note that all festival events are also included in the 2021 UNBOUND: Chamber Music Soirées pass that can be purchased at st-francis-music-academy.ticketleap.com/2021unbound.

Saturday, October 2, 10:30-12 noon – Children’s Imagination Corner: My Family Tree
A fun and creative time for children of all ages to explore their cultural heritage through music, storytelling, and drawing, with violinist Yuriko Yasuda. Participants will also paint birdhouses to be displayed in the church garden, in celebration of the feast of St. Francis of Assisi.

Saturday, October 2, 7:00 PM – My America: A Poetry and Music Mosaic
An interactive evening of poetry and music featuring readings by award-winning Alabamian poets Desai Ogada, Alina Stefanescu, Maria Vargas, and Shanti Weiland intertwined with American folk tunes arranged for violin and piano, performed by Duo Szasz-Voicu. The audience will also be invited to read selected poems by Maya Angelou and other American poets.

Sunday, October 3, 9:30 AM – Laudes Creaturarum
Our traditional blessing of the animals service for beloved pets and their human companions, with bluegrass music provided by No Longer Strangers. All are welcome!

Sunday, October 3, 6:00 PM – Movie & Popcorn: West Side Story (1961)
A FREE community screening of the iconic classic that won 10 Oscars, the most ever for a musical movie! Popcorn and soft drinks will be provided.

Ongoing Virtual Gallery
The cover art and design for our festival poster is by young artist Jessie Hook. You can visit her virtual gallery and purchase her art at www.jessiehook.com.

The exhibit scheduled on October 1 features jewelry and art by Jana and Joe May. You can visit their website and purchase their art at www.ArtToLiftTheSpirit.com.

Choko Aiken – Born and raised in Japan, jazz musician Choko Aiken studied piano, violin, voice, and music theory at colleges in Tokyo and Fukuoka, and jazz in Los Angeles and New York.  In 2011, she recorded Imagination, an album that subsequently was featured in the award-winning Jazziz Magazine. In 2013, Choko relocated to Birmingham, after meeting her husband Jeff. Since then, she has become a beloved and sought-after jazz musician of the Magic City and has enjoyed playing at many local venues including the 4th Avenue Jazz Festival, Moss Rock Festival, Creek Bank Festival, Mountain Brook Arts Festival, Eric Essix Jazz Escape, and Birmingham Super Jazz, among others. Choko’s main goal as a performer is to simply make people happy with her music!
​
Chris Kozak – Chris Kozak is associate professor and director of jazz studies at The University of Alabama. He holds a master’s degree in jazz arranging and composition, and a bachelor’s degree in African-American jazz studies in double bass performance from the University of Massachusetts in Amherst, MA. Over the years, Chris has performed with a vast array of notable jazz artists, and in 2000, 2001, and 2002 he was a Downbeat Jazz Award recipient with the UMASS Studio Orchestra on double bass. A member of the Jazz Education Network, he is active as a clinician and high school jazz festival adjudicator at the regional, national, and international levels. One of the accomplishments Chris is most proud of is his work in Colombia, South America, with the Cultural Exchange Centro Colombo Americano, where he helped develop and teach a jazz program that benefitted students and young children in various South American communities.

Desai Ogada – Desai Ogada is a Birmingham-based interactive theater creator and poet who blogs about theatre, poetry, and poly-culturalism and is especially interested in combining indigenous stories and art.  He feels poetically inspired by surrealism and dadaism as well as by the Magic City, whose “enchanted lansdscapes and magical history from industrialization to civil emancipation” inform his love for the city and its relationship to his creative work. In addition to sharing his talents with Birmingham, Desai is the co-founder of the Lagnet Theater Company in Kenya.

Duo Szasz-Voicu – Performing a vast repertoire of works for violin and piano, Daniel Szasz and Alina Voicu have played together extensively and received high accolades both in Europe and the US.  During the years, the duo has participated in several music festivals, including in Graz, Austria; Sopron, Hungary; Chautauqua, New York, USA; and Sibiu, Romania, among others. In 1990, they received the Public Prize at the Vittorio Gui Chamber Music Competition in Florence, Italy, and in 1995 they released Romantic Expressions, a CD of music by Romantic composers and poetry by Rilke. Advocates for music education and excellence in performance, Daniel and Alina are partners both on stage and life.

Steve Ramos – A Washington DC native, Steve Ramos is well known as a drummer and jazz percussionist. Skilled in many styles, including jazz, rock, funk, and Latin, he studied music performance at the University of Maryland and University of Montevallo and has been performing on Birmingham stages since the early 90s. Over the years, Steve has been a member of several active performing groups, including the Night Flight Big Band and Ray Reach & Friends. His most notable collaborations include playing with Mary Wilson and Taylor Hicks and recording with Brother Cane.

Daniel Szasz – Active as a concert soloist, chamber musician, and recitalist, Daniel Szasz has been the concertmaster of the Alabama Symphony Orchestra since 1997 and of the Lake Placid Sinfonietta since 2006. A versatile musician, interested in performing both standard and less familiar repertoire, Daniel was born in Sibiu, Romania, where in 2004 he initiated the establishment of the Romanian-American Music Days, an annual summer music festival that promotes American music and supports active professional interactions between Romanian and American musicians. Daniel has won numerous awards in national competitions in Romania as well as international competitions in Italy and the US. Some of his most notable collaborations over the years include solo appearances and chamber concerts with violinists Jaime Laredo, Andras Agoston; pianist Yakov Kasman; cellist Alban Gerhardt; mandolinist Chris Thile, and bandoneonist Raul Jaurena.

María Vargas – Maria Vargas is a Nicaraguan poet, narrator, and translator. She graduated from UAB with a BA in English and a BA in Philosophy, and from The University of Alabama with a PhD in Latin American Literature. Her work has appeared in anthologies published in England, Argentina, USA, and Nicaragua. In 2010, she won a Hackney Literary Award and, in 2004, her book, Los ojos abiertos del silencio (The Open Eyes of Silence) won the Rafaela Contreras Prize for Central American Women Writers. Maria is a member of the Nicaraguan Association of Women Writers and of PEN Nicaragua. She lives in Birmingham, Alabama

Shanti Weiland – Shanti Weiland received her BA in English from the University of California, Davis and later moved to the desert, pursuing a Creative Writing MA at Northern Arizona University. She then traveled to the humid and friendly south, where she earned a PhD in Poetry from the University of Southern Mississippi. Shanti currently teaches writing and literature at The University of Alabama and lives in Birmingham with her wife and pets. Her book, Cracked Planet, is forthcoming from Negative Capability Press. Shanti’s first book, Sister Nun, was the 2015 winner of the Negative Capability Press Book Competition, judged by Amy King. Shanti is currently writing a book of poems about Star Trek: The Next Generation; authors the blog, The Poets That You Meet; and hosts the web corner  Online Enlightement.

Yuriko Yasuda – Violinist Yuriko Yasuda, originally from Sapporo, Japan, has served as the principal second violinist of the Alabama Symphony Orchestra since September 2005. Prior to her engagement with the orchestra, Yuriko was a member of the New World Symphony in Miami and was a concertmaster of the Civic Orchestra of Chicago. An acclaimed teacher who has coached chamber music and youth orchestras nationwide, her students won numerous competitions and leading positions of All-State and national youth orchestras. Yuriko and her husband, Truong Nguyen, are proud parents of three children; as a family they were extremely generous to recently donate their time and talent to create an inspiring presentation of the Hana Hashimoto, Sixth Violin children’s book for the Music Corner Story Time project.

Individual passes (covering all events) are $30; family passes (for up to 4 people) are $50. Passes can be purchased at st-francis-music-academy.ticketleap.com/6th-annual-st-francis-arts-festival-america-the-beautiful.
Please note that all festival events are also included in the 2021 UNBOUND: Chamber Music Soirées pass that can be purchased at st-francis-music-academy.ticketleap.com/2021unbound.

October 1, 2021- Friday’s jazz concert is followed by an art exhibit and a reception.

October 3, 2021 – Sunday’s movie is a FREE community screening of West Side Story (1961). Popcorn and soft drinks will be provided.

CONNECT WITH The Episcopal Church of Saint Francis of Assisi