Solid Rock Church was birthed on Oct. 2nd, 1994 in a storefront building in Gardendale, AL (about 5 miles north of Birmingham, AL). The first service had less than 10 people in attendance. It was a humble beginning but we knew that we had received a mandate from God to establish this new work.

As SRC grew we were forced to move to other locations. In 1995 we moved to Trafford, AL. In 1997 we moved to a much larger location in Blount County (about 20 minutes north of Birmingham, AL). Each of

Solid Rock Church was birthed on Oct. 2nd, 1994 in a storefront building in Gardendale, AL (about 5 miles north of Birmingham, AL). The first service had less than 10 people in attendance. It was a humble beginning but we knew that we had received a mandate from God to establish this new work.

As SRC grew we were forced to move to other locations. In 1995 we moved to Trafford, AL. In 1997 we moved to a much larger location in Blount County (about 20 minutes north of Birmingham, AL). Each of these locations were completely remodeled and restored by the congregation of SRC. After 7 years in the Blount County location, we sensed it was time for another major move.

From the very beginning Pastors Larry and Sandy had always wanted to move to the city of Pinson, AL (10 minutes NE of Birmingham, AL), but no buildings were ever available. That is until we realized the "Old Rock School" was for sale.

The Old Rock School is a historical building. Parts of the facility were built in 1921 by local residents. Over the years, the school system added many classrooms as well as a gym and cafeteria. After many years, the buildings began to become neglected and finally in the late 1980s it was closed down. Daycare services were provided in parts of the facility until the late 1990s. In 1998 it was closed down completely. The Jefferson County School Board decided to tear the buildings down. But the residents of Pinson would not let the beautiful building be lost forever. The community rose up and saved Rock School from demolition.

The leaders of SRC believed we could “restore” and “rebuild” this great facility and bring it back to its prominence in the community of Pinson. It would be the greatest test of faith and dedication this 10 year old congregation had ever faced.

In 2003, SRC entered into a lease purchase agreement with the Jefferson County Board of Education to acquire the property. For the next 14 months the congregation of SRC worked 5 and 6 days a week to restore what would be called “phase one” of three phases.

The Old Gymnasium is now our sanctuary. The old locker rooms are now our restrooms. The front entrance of the Old Gym has been expanded and is now a beautiful foyer. Three other classrooms have been restored to become our Nursery and Children’s Church. It is amazing to see the transformation.

Soon after our first service (Sept. 26, 2004) we began to experience immediate growth. First time visitors started coming every week. Many of them just wanted to see what had been done to the buildings.

Almost immediately, SRC began to turn its attention to the needs of our community. From the beginning we have emphasized that we are not here to “compete” with anyone, but rather to help “complete”.

SRC promotes “Unity in the Community” in some way every week in our services. We encourage our people to get involved in “community clean up days”. The Mayor of Pinson along with the council has spoke in our pulpit and thanked SRC for helping to change Pinson.

Some other ways SRC is reaching out is through our monthly “Community Give Aways”. Each month the doors of SRC are opened to anyone in need of clothing, furniture, food, toys and household items. Everything is completely FREE. It is such a blessing to see children and parents’ eyes light up when they are able to take a new kitchen table or a new jacket home with them.

Another ministry started by SRC in Pinson is the “Extreme Makeover – Lawn Edition”. SRC has reached out to elderly people who are not able to take care of their yards. We have gone in with chainsaws, trimmers, and lawn mowers and transformed the yards of those who would not be able to do it themselves.

SRC is a church with a purpose and a vision. We have learned throughout the years and through the many “restoration” projects that they are only “shadows” of our real reason for existence. The driving force behind this ministry is to ‘restore and rebuild” the lives of the many downtrodden and hurt.

There are still two more phases of construction before the Old Rock School will be completely restored. There are also many more phases of outreach to our community that are coming in the next months and years. Just as the “rocks” have stood as a symbol of hard work and outreach since 1921, so will the love and relationships that are being forged by the people of Solid Rock Church. 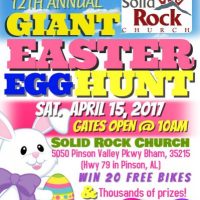